I was fairly disappointed when I found that when printing to an XPS file from Word you have to manually specify the filename every time. This is fine if you have one file you want to convert to an XPS file or even a few, but if you have a number it becomes quite a tedious process. I'm now using XPS documents as part of further work flow and I found it frustrating to have to enter the filename every time. 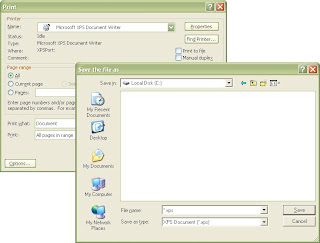 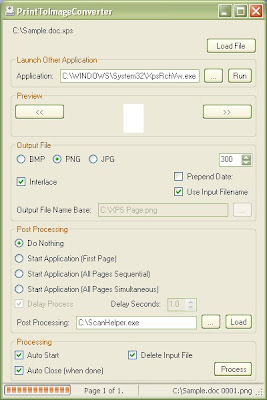 If you’re interested in this let me know and I'll upload it so everyone can use it.
Update: I have made this available, see my free software page.

With Word documents you already have the option to right click and print, but this only works in this case if your default printer is set to the XPS writer and you'll still have to specify the file name every time, all in all if you have enough documents this eats up a lot of time.

So what I really wanted to be able to do was not even have to open the document, but instead right click on it and simply select Print To XPS.

I couldn't find the information on how to do this, so I worked out how to do it and thought I would pass on here.

There are two parts to installing this:
• Installing the macro into word.
• Creating the right click context menu in explorer using the registry editor.


Installing The Macro Into Word

These instructions are for Microsoft Word 2003, but I'm sure that you can do the same things for other versions of Word, you will just have to be a little clever if things aren’t in the same place.

Update 01/09/2010: I have tested this with Word 2007 under Windows 7 and found that it still works, there is just a little variance in where things are located.

Open up a new word document and go to:
Tools->Macro->VisualBasicEditor

You will see the project explorer, it will contain two documents Normal and something like "Project(Document1)", we are interested in "Normal" because we want to apply the macros to the Normal template so that we can run it from any document, if you select the other option you will apply it to the currently opened document, which means the macro will only work with that document.

Download this macro file I have created, which contains all the macros we need to print to XPS files using the documents name as the name for the outputted XPS file. 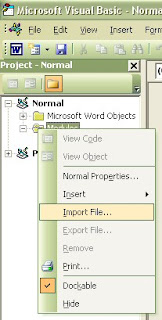 Select my macro file from the import file dialog.

The file will now appear under the modules in the normal document and the code should show in the editor. 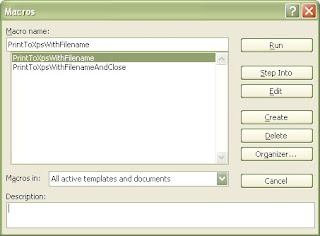 If you want you can now assign keyboard shortcuts or menu buttons, but these are fairly trivial so I will leave you to do that yourself.

If you aren’t familiar editing the registry you might want to do a bit of background reading first.
Obviously backup your registry data first.

Fire up the registry editor.

First we will do it for old .doc documents, but see further down if you want to do it for .docx’s.

Create a key called "PrintToXPS", set its (default) string value so that it is "Print To XPS" this will be the name that shows up on the files right click explorer menu.

Now create a sub key in the “PrintToXPS” key called "command", this key will hold the action that we want to perform. So now you should have:
HKEY_CLASSES_ROOT\Word.Document.8\shell\PrintToXPS\command

Set “command”s (default) string value to everything between the brackets but not including them ["C:\Program Files\Microsoft Office\OFFICE11\WINWORD.EXE" /mPrintToXpsWithFilenameAndClose /q /n "%1 "]

Update 01/09/2010: For other versions of word you need to adjust the path you use. For Word 2007 use:
C:\Program Files\Microsoft Office\OFFICE12\WINWORD.EXE

If you want to do it for other types of documents we need to find out where the shell command for that document type is located. I imagine it will be the same on your system so you probably won't need to look this up, but if you have trouble see what values have on your system.
To do this expand HKEY_CLASSES_ROOT\, you will see a huge amount of sub keys, you want to scroll down until you find the extension of the word document you want to be able to print from. On my system I can see the following two keys with the default value listed afterward:
HKEY_CLASSES_ROOT\.doc - Word.Document.8
HKEY_CLASSES_ROOT\.docx - Word.Document.12

That should be all, you should now be able to right click on the Word document types you have set up and click “Print To XPS”.

Some further info for those who just need to know:

I think that the above is just a symbolic link to this key:
HKEY_LOCAL_MACHINE\SOFTWARE\Classes\Word.Document.8\shell\

So I have a feeling (although I haven't tested this) that if you want to apply it just to the current user you could put it in:
HKEY_CURRENT_USER\SOFTWARE\Classes\Word.Document.8\shell\Print To XPS

Email ThisBlogThis!Share to TwitterShare to FacebookShare to Pinterest
Labels: Tutorial